I’ve been waiting to write another wine review until I could discover another great one like the Saint Francis Old Vines Zin… but I haven’t discovered anything amazing recently so I figured I ought to just talk about a couple I’ve had recently. My sister-in-law and her husband have been visiting recently, so it’s been easier to quickly try a few wines… alas, none have been great. 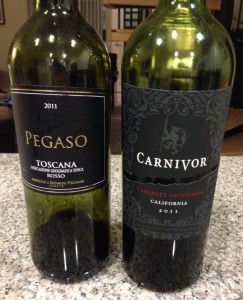 I got both of these wines, the Carnivor cabernet sauvignon and Pegaso Toscana, during a sale at Bevmo. They might be hard to find at other vendors.

I just had a glass of the 2011 Carnivor Cabernet. It’s an acceptable cab, and I think I got it for two for $25 or something, so it’s not very expensive. But… it’s only OK. The wine is a very exciting looking deep red, but when I smelled it I didn’t find too much of a nose. The body had an interesting smoky taste, and there was a slight but happy finish. But I don’t think it was particularly fruity or jammy, which is what I would have expected. Maybe some strawberry on the very end. All that being said, it wasn’t bad and for the price I’d say “ok.”

I also got the Pegaso Toscana Rosso on sale at Bevmo. While I don’t remember the exact price, it doesn’t really matter since I won’t be getting it again. This is an example of an blah food wine that goes really bland on it’s own (yes, I like to have a glass while I’m cooking before I eat…) On it’s own it didn’t really have any particular flavor that I can point out. I had it with a nice bison bolognese, and it seemed to develop a little spirit, adding a bit of fruit and a finish. But still, not a great wine.

One of the first things I do when I start a consulting project with a company is work on dashboards – What are the KPI’s and how are they being measured/tracked/presented. Do the decision makers have constant, in-their-face access to the metrics they need to make decisions.

Avinash Kaushik is a data guru and a data driven marketing thought leader. You should follow his blog!

I started this blog as a way to share more personal info about me, Healy Jones, plus have a stable home for a lot of my marketing and tech startup writing. I’m happy to say that visitors have been growing quite a bit – and my most popular post so far was the one on wine, the St Francis Zin! So I’m going to write a few more wine posts in the near future – I may have finally found that decent, $10 bottle of red table wine that I’ve been searching for. You know it – the one you can open on a weeknight, really enjoy, but not feel guilty if you don’t polish off the bottle! Stay tuned…

Any company can copy the keystone of Apple’s design process http://qz.com/183861.

The balance between process and creativity can be pretty hard to achieve. This was a thoughtful post on how process can actually be liberating to creative people. I’m sure that, in practice, it sometimes felt overwhelming/annoying. But the idea is great.