Of course, that doesn’t seem to be helping my Apple shares this morning. 🙁

I came across an ad optimization study published by Google, and it’s pretty great. Joe Castro has a good write up of some of the key findings. I know some of this is pretty obvious, but I really like to have a checklist like the following so that I don’t miss anything in the rush to get a campaign out the door.

This post on content marketing as a way for salespeople to stay relevant is really good. The real, real trick is to make the content marketing personalized AND automated. That’s when content marketing takes off and produces scaleable ROI. Hard to do, but a content library, plus smart social media curation, is a great way to start.

I thought it was pretty clear by now that spam comments were actually HURTING search results, but I keep getting new ones. What is going on, didn’t Penguin 2.1 resolve this forever? I’m halfway tempted to let them through to hurt dental sales.com or whatever is trying to benefit from them.

Man this is a volatile stock! 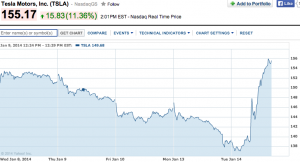 Note that I currently own a tiny amount of this stock.

Let’s say you are sending 100,000 emails out for something like a newsletter or CTA to your user base. Getting the best time of day and best day of week matters. If you have sophisticated internal analytics you should try to track all the way back to the desired CTA of the email. As in, did the email generate users upgrading to paid at a particular time of day, or did you get more transactions or whatever your goal was with the email. But an easy, and important, metric that most marketers can track is the click/delivery rate.

There are a couple of ways to find out what your best time of day is to send.

Mailchimp has great stats on generic marketing email sends, and you should read their post on best time to send emails here. It’s a good place to start if you have no data, and it is also cool to see high level data/aggregated data.

When you get really big lists you can start to test within segments. For example, if you have some business users and some consumer users, they are very likely to react differently to different email timing. (Of course you should also be sending them different email copy, but that’s a whole other topic.)

Finally, every company that I’ve worked with has had Tuesday and Wednesday be good days to send emails. Maybe not the best best day (that really varies by company) but those days usually don’t disappoint. Time of day, on the other hand, has been different for every product I’ve ever worked with.

I am continuously reminded of how important it is to track channel performance all the way through to engagement/retention/KPI.

I came across this great infographic on iboxseo – it’s nicely lays out the tactics you need to get Google juice for one of your web site’s pages. The bottom of their blog post has ‘ranking factors’ – basically a cheatsheet on what matters, now, for Google’s ranking engine.

It’s a great post; check out all the tips at the bottom of it!

My first blog post back on Startable after I left the venture capital world was on early stage venture capital valuations. Basically, what an entrepreneur raising a Series A needed to know about how VC’s approached valuing their business.

Having raised money with OfficeDrop, I think that the answer is still pretty much the same – it has nothing to do with DCF’s or other business school theories, but instead is based around what the VC thinks/needs to return to their fund from that particular investment. The following is a bit of an over simplification, but is as close to a “rule” as I could gleam from my time in venture capital.

Series A* valuations are usually based on percentages – as in, how much of the company does the venture capital fund want to own. Most established venture funds have an established strategy of owning a particular percentage of a company after a Series A investment. A typical, good fund will look to own 20% to 33% of a company after the initial investment. I’ll ignore the rational behind this for a moment and cut to the chase: this means that during a normal two-VC, syndicated Series A investment your startup sells around half the company to the VCs. Raising $4 million? Pre-money of $4 million. Raising $6 million? Pre-money of $6 million.

Getting a higher valuation

Strange as it sounds, this does imply that the more you raise the higher the valuation. I’ll get into the rational behind this “math” later in the post, but first I’ll mention a few things that you can do to try to command a higher valuation.

So why are valuations dependent mainly on percentage of the startup owned? When making an investment, venture capitalists are already thinking of the exit. They want to know how much they will return to the fund if the company is sold for $50 million, $100 million, half a billion or more. (Don’t try to present the results of this calculation to them; they can do the math on their own. You can do this calculation for your own edification, but you’ll come across as a naive management team if you try to tell the VC how much money they are going to make.) This return is very much dependent on how much of the company they own at the exit. Keep in mind that an early stage investor is likely to experience some dilution if the company will need to raise more funding later down the road, and that the first round VCs will also have to invest some money in these rounds to defend their ownership as new investors come into the company.

The VCs are also thinking about how much of the company is owned by the management team. A good management team has many, many employment opportunities. The VC wants to make sure that the team is properly motivated to help grow the startup. Basically, an important founding team member need to own enough of the startup at an exit to make more (hopefully a lot more) then they would have if they were getting a good salary for five+ years at a big company. The VC can’t let the management team get so diluted that they lose motivation. A venture capital firm needs to think ahead to the likely future financing needs of the business and estimate how much of the business the management team will own at the exit. In truth, the VC will probably only run this exercise for the CEO and the most important technical founder (if they are not the same person.)

There are logical limits to the “raise more money/get a higher valuation” theory I’m proposing. There is likely a narrow band of capital that most VCs will be willing to invest in certain type of companies at the Series A round. For most software and online businesses, this is likely $2 to $6 million, perhaps a bit more on the high end if you have a great team and some traction. So, venture capitalists are unlikely to let you raise $20 million of venture funding at a $20 million pre-money valuation for your online dog food distribution company. They are usually smart enough to not want to over-capitalize a business unless the plan justifies it and the risk/return ratio is correct. If multiple VCs are telling you that they don’t think you can/should raise more than $4 million for your particular startup then you’ve probably found the market clearing round size, and by extension, narrowed the band of the likely pre-money valuation.

Does this make sense? Probably not. But it is the best theory I can fit to the evidence that I’ve seen during my brief time as a venture capitalist. I’d love to hear your theories and experiences.

*I am speaking to the usual “Series A” startup, which usually does not have much in the way of revenues and is often pre-product.